This is a page about Past Special Exhibitions for the Sumida Hokusai Museum.

February 14, 2018(Wed.) - April 8, 2018(Sun.)
In the changing of painting style, Hokusai established a distinctive style “Ukiyo-e portraying beautiful women”, which attracted many people by capturing the trend. The world of fabulous beauty paintings depicted by Hokusai and his pupils. 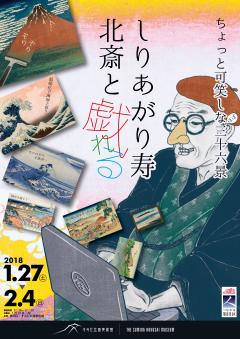 January 27, 2018(Sat.) - February 4, 2018(Sun.)
Only 8 days exhibition of manga artist Shiriagari Kotobuki who held the lecture in our opening memorial symposium（Dec 2016） and the lecture of the exhibition“A Ramble down the Tōkaidō Road”（May 2017）！！

Shiriagari Kotobuki is a Japanese manga artist whose unforgettable works deal with various topics, such as gag strip and social problem. Moreover, in 2014, his animation “Voyage de Hoksuai” was shown in the exhibition “Hokusai” held in the Grand Palais (Paris). Today as a contemporary art artist, he creates fine art pieces and held solo exhibitions in museums in Japan last year.
Shiriagari will make nearly 36 new works while he is playing a little trick on master pieces of Hokusai who he respect for. His humorous homage let us feel familiar with Hokusai. Please enjoy comparing with his inspired Hokusai’s original images (replica) which is displayed next to Shiriagari’s one.

Celebrating Our First Birthday: Happy Hokusai - Good Fortune from A to Z

November 21, 2017(Tue.) - January 21, 2018(Sun.)
In Hokusai’s day, it was customary to welcome the gods at New Year’s and other turning points in the year, to give thanks and to pray for good health, tranquility, and bountiful harvests. Edo-period people with literary inclinations enjoyed privately commissioning prints, known as surimono to distinguish them from commercially published prints, and giving them to each other. Hokusai and his pupils produced a great number of surimono with the gods and other auspicious icons as well as scenes of New Year’s customs as their subjects. Their work on lucky themes was used in warm-hearted interactions between friends and family members, displayed in homes to bring in good luck, and given as New Year’s gifts to express hopes for the recipients’ good fortune. In that spirit, we are displaying these luck-bringing works by Hokusai and his school with gratitude to all who have supported our museum since its opening, who have come to our exhibitions, and who will continue to cheer on our efforts. The exhibition consists of four section. We hope that you will enjoy Happy Hokusai—Good Fortune from A to Z.

October 31, 2017(Tue.) - November 12, 2017(Sun.)
Ultramodern architectural design is one of characters of the Sumida Hokusai Museum which dedicated to the works of Ukiyo-e master Katsushika Hokusai.
The Sumida Hokusai Museum is the place creating the community where local people get together. The community creates the culture which will change Sumida city in the future.
The museum was designed by Sejima Kazuyo one of the leading architects in Japan today. The novel outside covered by walls made from aluminum panels that have a slightly mirrored surface.
Sejima’s modern architecture and Hokusai’s traditional Japanese art works seem conflict each other but have something in common because both draw great deal of global attention.
Hokusai had studied hard latest drawing method at same time he depicted comically warmheartable people. Sejima’s work is not only stylish as well as integrates community and people.
This exhibition introduces both innovative artists who attract world each in Edo period and today thought the Sumida Hokusai museum. 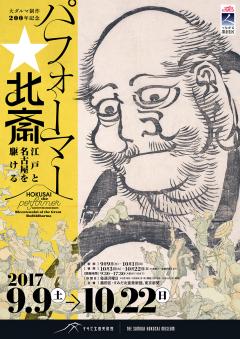 Hokusai the Performer, Electrifying Edo and Nagoya Bicentennial of the Great Daruma

INAGRAL Exhibition III: A Ramble down the Tōkaidō Road – Travelling with Hokusai along the Fifty-Three Stations

April 18, 2017(Tue.) - June 11, 2017(Sun.)
Utagawa Hiroshige comes to mind when talking about the 53 Stations of the Tōkaidō, but Katsushika Hokusai also worked on a large number of the motif 30 years earlier, which stood out from those of other painters of the era. Unlike Hiroshige, who mainly painted landscapes, Hokusai painted small, detailed depictions of the customs of the land. In this exhibition, we’ll be unveiling the precious Shunkyō Go Jū San-Da no Uchi, shozuri*set from Hokusai’s 53 Stations of the Tōkaidō series (with half being exhibited in the first period and the other half in the second period). We introduce the many aspects of the world of Hokusai’s 53 Stations, with exhibitions on every series, topic, and more. Succumb to the charm of Hokusai’s unique 53 Stations of the Tōkaidō series in an exhibition made up of five distinct elements.

*Shozuri:
The word defines as first editions in modern publishing, and are the best condition woodblock prints, with finely carved detailed expressions. The intentions of the original artist are thus best reflected in terms of color, among other factors.