This is a page about Neighboring Facilities for the Sumida Hokusai Museum.

Edo-Tokyo Museum
A unique architecture resembling a high-floored storehouse and one of Tokyo’s leading tourist spot. The museum has a permanent exhibition that displays actual documents of history and culture of Edo-Tokyo along with miniature models. Special exhibitions are also held five to six times a year with various lectures and workshops.

Ryōgoku Kokugikan (Sumo Hall)
Ryōgoku Kokugikan is located north of the JR Ryōgoku Station with a highly noticeable green and copper rooftop. This 35,000 square meter hall has a capacity for 11,000 people, and is utilized for various concerts and events. A Sumo Museum is located adjacent to the Kokugikan and displays materials related to sumo wrestling. 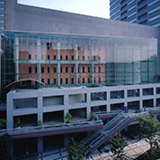 Sumida Triphony Hall
The concert hall consists of one large hall with 1,801 seats and one small hall with 252 seats. The acoustic space is one of the best in Japan, and is the first official franchised concert hall that accepts orchestras. It is the base performance hall for the New Japan Philharmonic symphony orchestra.

Midori Library
The library is located south of the museum on the other side of the railroad (JR Sōbu Main Line). The library has a collection of 120,000 books (including 3,000 audio-visual materials) making it the second largest volume in Sumida-ward next to the Hikifune Library. Talk sessions and speeches are held in the library.

Eko-in Temple
The enshrinement hall was first built to commemorate the victims of a disastrous fire in 1657. During the late Edo period, sumo wrestling in the temple became popular, and the Ryogoku Bridge area became more prosperous.

Kyû-Yasuda Teien (Former Yasuda Garden)
A municipal park with a stroll garden and a pond that links to the Sumida River. In the past, one enjoyed changes in the pond’s water level and scenery brought about by the tidal variations of Sumida River. Today, the park is cherished as a cultural heritage garden with a view of the Tokyo Skytree.

Nominosukune shrine
This shrine originates from 1884 when the first boss of the Takasago Stable enshrined the founder of sumo “Nominosukune”. Inside of the shrine consists of two stone monuments that inscribe the names of the yokozuna (grand champions).

Midoricho Park
The park is located in front of the Sumida Hokusai Museum. Nearby kindergarten children often come to play, and fantastic illuminations are decorated in November each year. The public tennis courts are also available for rental.

Oyokogawa Shinsui Park
A large water park which extends north of the Narihira Bridge about 1.8km and intersects with the Tategawa River. The park has various fun spots for families with children such as fishing pools, riverbeds, and rolling slopes.

Sumida Hokusai Museum
This museum honors the ukiyo-e artist Katsushika Hokusai, who is the pride of the Sumida citizens promoting his work to the world. Through art and craftwork related to Hokusai, the town creates new interactions. The museum aims to become the center of local activities while contributing to the manufacturing and tourism industry. 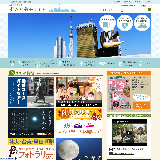